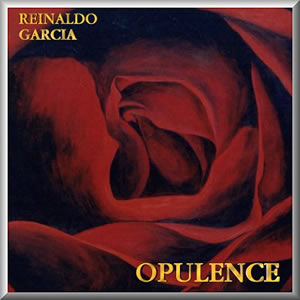 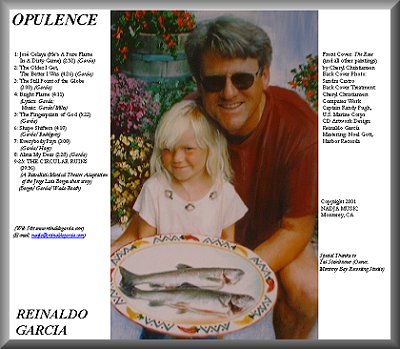 Death whispers in our ears: "Pay attention." When we obey Death's dictum, life (an illusion we must take seriously) is opulent. The French word for "orgasm" is "little death." I die a little every day. I am no postmodern ironist. Irony: the coward's first refuge. Failing that, he longs for academia.

-The Older I Get, The Better I Was: Written in October 1997, while my wife, our daughter Victoria and I were homeless in Monterey. Resurrected by ace masterer Noel Gott of Santa Cruz's Harbor Recording Studio from the doomed 1998 TOP DEAD CENTER sessions, recorded by a roly poly medicated dyslexic "engineer. "Guitars: Renzo Staiano; back-up vocals: Andrea Carter. Two years later, I added vocals by Karl Dobbratz, drums by Curtis Arnbrister; and bass by Ted Steinbruner.

-Bright Flame: For a white hot soul whose spontaneous combustion burned her alive. (Many of my songs are gargoyles perched outside my soul's cathedral, warding off evil.) The basic rhythm and male back-up tracks were composed and recorded by Tony Miles. I supplied the lead melody and the arrangements. Strings: Shawn Starbuck; back-up vocals: Gloria Hennessy. Co-produced by Ted Steinbruner of Monterey Bay Recording.

-The Fingerprints of God: Written in February 1996. With an intro by Renzo Staiano, we performed this piece in an abandoned seaside chicken coop during 1998's prodigious El Niño winter. Nearly three years later, I added guitars by Tito López, drums by Curtis Arnbrister, bass by Ted Steinbruner , and backup vocals by Karl Dobbratz.

-Shape Shifters: Written in my mother-in-law's house, Christmas Eve 1997 in Cuernavaca, México, while reading a Neruda collection. We'd gone there to get our daughter baptized. The water gave her a raging fever, caught on home video. Musically, an homage to Cuban troubadour Silvio Rodríguez, with Renzo Staiano on guitars, and drums by Curt Arnbrister and back-up vocals by Karl Dobbratz added two years later.

-Everybody Pays: Written in May 1990 in Cuernavaca, during the Pope's visit. Inspired by Gurdjieff. Set to music in Boston, August 1990, by percussionist Jim Harp, as a coda to my MORTAL MEN & GODDESSES: Tales of Anima Possession project.

“Sports and gallantries, the stage, the arts, the antics of dancers,
The exuberant voices of music,
Have charm for children but lack nobility; it is bitter earnest-
ness
That makes beauty; the mind
Knows, grown adult.”
-from Boats in a Fog, by Robinson Jeffers (Carmel-by-the-Sea, CA)

Clocking in at just under 40 minutes, I adapted this ritual-based theater piece from Jorge Luis Borges' short story in 1988, while writing screenplays in a pueblo called Tres Marías, 10,000 feet above sea level, between México City and Cuernavaca. It sat in my archives for over three years, until a housewife named Mary Wada-Roath walked into my Cal State Fresno songwriting class and said she wanted to write film scores. I handed her these sprawling lyrics as an exercise. By the next week, she'd set the words to melodies. Over a year later, Mary completed and recorded the instrumental score. In early 1993, Puerto Rico's Ishmael Huggins sang the lead of the magician who yearns for a son. I sent the unmastered cassette version to classical music critic Scott MacLelland, and to Untiversity of Texas at Austin Professor Emeritus Carter Wheelock, one of the world’s foremost Borges scholars. Wrote MacClelland: "What impressed me about the music was its variety and vitality, some of it ritualistic, some ceremonial, some personal and, may I say, intimate. I found it both stimulating and satisfying, and refreshingly free from predictability." From Professor Wheelock of the Department of Spanish and Portuguese, I received this: "I have enjoyed hearing it; the words and poetry are effective in capturing the tone and spirit of Borges' short story...in view of your many accomplishments in the field of theater, I have decided to forward it to the university's department of Radio, Television, and Film." I didn't master the piece until August 2000. And here 'tis.

Front Cover: The Rose (and all other paintings) by Cheryl Christiansen

Special Thanks to Ted Steinbruner